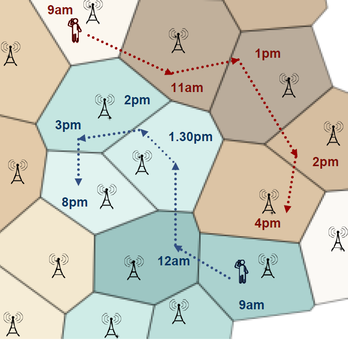 Mobile phones are nowadays one of the most pervasive technologies, reaching urban and rural populations across all socio-economic spectra. They allow to collect large-scale data providing extremely rich information on individual behavior. Every time individuals use mobile phones by making a call or sending a message, they produce a Call Detail Record (CDR). CDRs contain several attributes of the mobile phone activities including the caller and callee Ids, the type of the activity (incoming or outgoing call/SMS), the duration and the place and time when the mobile phone activity occurred. Such data provide the possibility to extract the social and mobility behaviors of the users. In fact, it can be used to extract the social interaction network based on social communications amongst individuals, or to reconstruct the individual trajectories by interpolating the displacements between any two consecutive activities. These reliable and detailed information are largely used for building spatially explicit epidemic models that take into account the contribution of human mobility to disease transmission.
In our lab, we use mobile phone data to inform non-Markovian models for disease spatial transmission.
We mainly have two lines of research. A theoretical one, where we assess how much of this high-resolution is needed for epidemic metapopulation models, depending on the disease and epidemic context. And an applied research direction, focusing on the role of mobility in the HIV epidemic in sub-Saharan Africa, and the interplay between mobility and social dimensions on the 2014 West Africa Ebola virus epidemic. 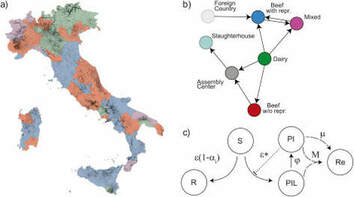 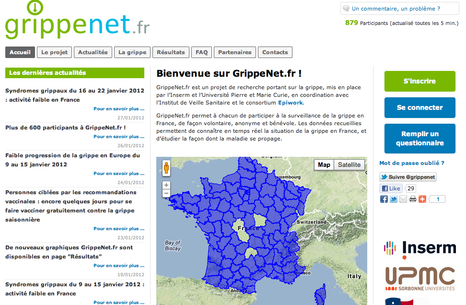 Determining the number of cases in an epidemic is fundamental to properly evaluate several disease features of high relevance for public health policies such as mortality, morbidity or hospitalization rates. Disease surveillance is key to control and response planning, providing valuable information to devise and apply public health interventions in time. The recent H1N1 influenza pandemic provided a paramount example of the crucial importance of surveillance, highlighting the need to improve surveillance capacities worldwide and real-time response against emerging diseases.

Influenza activity is currently monitored using a combination of clinical and virological information collected through a network of sentinel medical practitioners (GPs) and a network of reference laboratories. The French experience of the Reseau Sentinelles counts more than 20 years of GP surveillance of communicable diseases in France. Developed in 1984 by INSERM in collaboration with the Ministry of Health, and taking advantage of computer systems and the Internet, it now includes about 1200 voluntary sentinel GPs who remotely enter reports on 12 conditions on a weekly basis. Results are accessible in form of plots, maps and reports on a publicly available website and are used by experts in the field for research purposes, but also by the general public and the media to get information on the current evolution. This huge longitudinal catalogue of disease surveillance data have provided invaluable information to conduct epidemiological research addressing a wide range of topics, from feeding modeling studies to the analysis of the geotemporal spreading patterns, the assessment of interventions on influenza morbidity, the estimation of relevant epidemiological quantities for seasonal influenza and emerging influenza pandemics.

Next to the traditional surveillance system, innovative Information Communication Technologies (ICT) are spurring the development of new mechanisms for information retrieval, and now start to allow the prompt gathering of large amount of data enabling for the first time the real-time analysis of a pandemic in a very detailed way. In particular, the collaborative aspect of the Web2.0 is now pervading a large set of systems including health-related ones. Influenzanet.org is an online project for disease surveillance that emerged in this context and that exploits collaborative aspects, pervasiveness of connection, and ICT to collect surveillance data at high spatial and temporal scales on a large European region. The system consists of a fast and flexible method to monitor in real time the temporal and geographic evolution of influenza activity in several European countries through the participation of volunteers in the population. Citizens living in those countries can freely and voluntarily participate, answering a weekly survey of questions for the assessment of influenza-like-illness (ILI) based on reported symptoms. The information provided by the users is treated according to the national and European privacy regulations, and is processed in real time and visualized in form of maps and plots, accessible directly on the website, and publicly available. 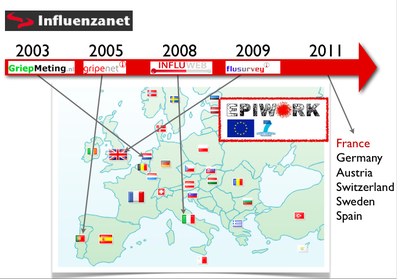 The system was originally launched in the Netherlands and Belgium in the 2003/2004 influenza season (www.degrotegriepmeting.nl) mainly as an experiment of scientific communication. It had a great success, reaching about 30K active participants and was then implemented in Portugal from the 2005/2006 season (www.gripenet.pt) and in Italy in the 2008/2009 season (www.influweb.it).  Starting 2009, it became part of the European Commission Integrating Project EPIWORK, aiming at the extension of the system to the entire Europe. New countries have joined the project since then, including the UK ( www.flusurvey.co.uk) and Sweden (www.influensakoll.se), and soon also Germany, Austria, Switzerland will follow.

Vittoria Colizza collaborated with the Computational Epidemiology lab @ISI Foundation for the development, set-up and scientific coordination of the italian system, influweb, that was launched in 2008 and today counts about 5000 users.

On January 25, 2012, in collaboration with the Reseau Sentinelles @INSERM & UPMC and with the InVS, we launched the online influenza system in France, under the name of grippenet.fr.

Do you live in france? help us monitor the influenza in the country, register on grippenet.fr and let us know how you feel. 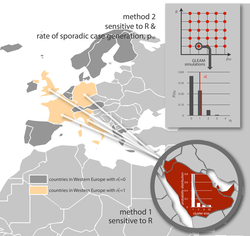 (Re-)emerging pathogens, such as MERS-CoV and Ebola, are source of large medical burden and economic costs. The early stage of the outbreak presents biological and epidemiological uncertainties that often hinder a prompt medical and health care response thus increasing the harm associated to the event. Improving our capabilities to assess the epidemic situation and its associated risk represents a fundamental scientific challenge with a clear public health impact.

We combine complex system approaches, extensive data integration, computational programing and epidemiological statistics to study emerging pathogen events in real time in order to provide understandings, risk assessment and projections. Crucial modelling framework within this effort is GLEAM, the global epidemic and mobility model, that combines real-world data on population and human mobility with ad hoc infectious disease dynamics to simulate epidemic events and provide scenarios analysis. A publicly available software based on GLEAM, the GLEAMviz Simulator, can be downloaded from the project webpage.

Human behavior displays many degrees of heterogeneity. Contact patterns among individuals, frequency and duration of travels, topology of transportation systems and fluxes of travelers, as well as many other aspects related to human interactions and mobility are shown to be broadly distributed and to largely fluctuate among different classes of individuals. Great part of epidemic modeling studies are based on simplifying assumptions typically relying on homogeneous approximations regarding some of the aspects mentioned above. Our research work in this area seeks to go beyond these simplifications aimed at reaching an understanding of the impact of the observed heterogeneities on the propagation of an infectious disease.Paragraph. Clicca qui per modificare.